The Vampire of Muy

"a degenerate impulsive sadist and necrophile"

In September 1901, Honore Ardisson entered the attic of his house to locate the source of a disgusting odour his neighbours had been complaining about., when he found the decaying corpse of a young girl. The Gendarmerie arrested his step-son Victor and charged him with stealing her body. The subsequent investigation discovered Victor was a grave-robber who had desecrated the graves of hundreds of women and had been having sex with their corpses for many years. He was a ghoul and prolific necrophiliac who became known as the Vampire of Muy, and was locked away after confessing to his monstrous crimes.

Antoine “Victor” Ardisson was born on September 5, 1872 at Muy, in Provence in Southeastern France to Elisabeth Apollonie Porre. Elisabeth did not know the identity of Victors father and she was generally known as a woman of disreputable character. She later married Honore Ardisson and they lived at 15 Grande Rue in the village of Muy. His mother displayed violent tendencies towards the young Victor, and would often strike him across the head, so much so that his step-father believed this contributed to his mental imbalance. Elisabeth left the family home not long after the marriage and Honore raised the boy as his own. It was said he often mistreated his wife and this was the reason she left home. His step-father then proceeded to take in female vagrants and beggars and made them his temporary companions. They lived in squalor and filth at the house, with several people sharing and sleeping together in the straw beds.

In 1882 the gravedigger of the town of Muy died. With only four or five burials a month in Muy it was not a rewarding or well paid job, but Honore Ardisson accepted the position and would take along his ten year old step-son to help him. Several years later Honore Ardisson fell into a pit and injured his foot and had such a fright that he gave up the job and Victor assumed the position on his own. It was during this time that he began to desecrate the graves of women and young girls. He later confessed to digging up around ten graves and sexually interfering with the corpses. In 1893 he was called up to join the regiment and Honore was once again given the job of town gravedigger. Victor was entrusted with guarding the powder kegs at a military prison. However, he soon deserted the regiment to work as a mason in Cannes where he earned 2 francs 30 a day.

He was happy there but he was considered lazy and ineffective at his job and left after one week. He then decided to return to Muy where he was arrested by the Gendarmerie for desertion and at the age of 20 he was sent to Marseille, where he was held in the military prison. He was eventually released after 100 days of confinement and was judged irresponsible but reformed and promptly returned to the family home at Muy. It was now he began to resume his nocturnal activities, using his fathers key to access the gate and gain entry to the cemetery. He would dig the grave using a shovel as well as his bare hands and remove the lid of the coffin, then he undid the shroud and sat the corpse in an upright position. He then proceeded to suck the breasts and the vagina, whilst talking to the corpse. According to his confession, he regularly spoke to the corpses and was genuinely upset when they would not respond.

He later told the doctors at Draguignan Jail that he had a fascination with breasts and he enjoyed licking the breasts and the clitoris of the corpse. Sometimes he raped the corpse, at other times he just abused it, then he placed everything back as it was and left. Age did not matter to him and he would dig up the graves of recently buried women and young girls. When his father gave up the grave-digging job he no longer had access to the gate key but he simply resorted to climbing over the low wall of the cemetery. In 1900 he dug up a young girl named Berthe, because she had such beautiful breasts. Ardisson later told the doctors he had never encountered such pleasure as he did with her corpse and he then visited her grave regularly over several evenings, something he had never done until that point.

On February 22, 1901 he dug up the grave of a young 14-year-old girl called Leonie who had previously died on the 20th. The Gendarmerie wrote up a report on the incident, stating the corpse did not appear to have been touch. He would often follow the funerals to see if the recently deceased was female and would often enquire about the illness they a succumbed to. He once dug up two sisters, but could not carry them home. Gabrielle, a 13-year-old girl died on April 28, and was buried in the Muy Cemetery. She was considered very pretty and because of this Ardisson wanted to have her.

After digging up her body he found it was too heavy to carry so he detached the head from the corpse with a pocket knife and then carried it under his arm without wrapping it and kept it at his step-fathers house. The head eventually mummified and he abused it for a long time, kissing it. When the putrefaction set in and there were complaints about the smell, he simply got rid of the remains and dug up a fresher corpse. In May he dug up and violated the body of a 17-year-old girl called Honorine who had passed away on May 15. Victor was not strong enough to take the corpses home with him, and only managed to carry the head of 13-year-old Gabrielle. So he sought a different corpse, one he could take home.

In September 1901 a 3 ½-year-old known as Louise died. She was described as a pretty little girl, a Victor decided to dig up her grave. He took her body and placed it in a bag, taking it to his house where he put her in the attic. He laid it on some straw and always went there whenever his father was absent from the house. For more than a week he satiated his desires on the corpse until putrefaction set in and after eight days he could no longer touch it. He attempted to separate the head but could not. The neighbours began to complain of a disgusting smell emanating from the Ardisson house and Honore told them it was garbage which he had placed in the attic.

To stop these complaints he entered the attic to remove the garbage and that’s when he found the body of Louise lying on the straw in her dress. At first he couldn’t make out what the figure was, but when he neared he armed himself with a shovel, and struck the corpse, believing it was some beast. When he fully realised what it was he went and reported the body to the Gendarmerie. After questioning Honore, the Gendarmerie searched for Victor and placed him under arrest. He was charged with multiple counts of exhumation and violation of dead bodies and sent to Draguignan Jail.

There he was examined by the prison doctor Boze and Dr. Belletrud of the Insane Asylum at Pierrefau-du-Var. These men conducted the forensic examination of Ardisson and questioned him about his sexual dysfunction and aberrant behaviour. They found that he rarely got angry over things and admitted that he never cried, and he never felt attachment or affection for anyone, only the dead. They discovered how he was able to withstand the putrid decaying smell of the bodies he had sex with when they tested his senses and found he had no sense of smell or taste.

When he spoke his words were often accompanied with a strange hiccup laugh, and he admitted to the Doctors he enjoyed prison, especially the cigarettes he was given, the bed and the meals he was receiving. He told the doctors he wanted to steal another corpse to replace Louise but he was caught before he was able. Victor claimed to have had sex with over 100 corpses and often referred to the girls as his fiance and his bride. He did not show remorse or regret for his crimes, he simply promised to give up his passion for the dead.

Several experts at the time examined Victor Ardisson in prison and commented on his unusual proclivity for the dead. Dr. Alexis Epaulard referred to him as “a degenerate impulsive sadist and necrophile”, whilst Dr. Richard von Krafft-Ebing called him a “moron void of any moral sense”. Because of his crimes he was sentenced to spend the rest of his life in a psychiatric hospital at Pierrefau-du-Var. Victor Ardisson died on March 9, 1944 at Provence-Alps-Cote d’Azur, aged 71. 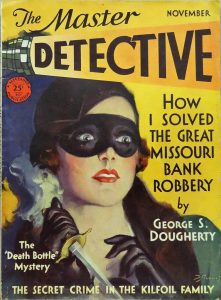